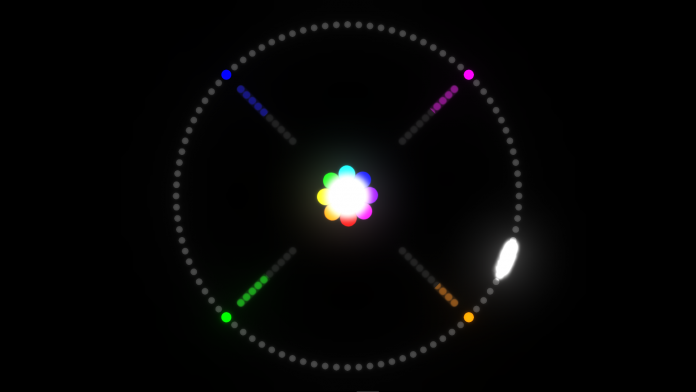 Dojji Ball was supposed to be a quick project. But I’m liking it and the gameplay is getting good feedback, so I’m putting more time into it.

I wrangled a new playtester at Alley yesterday, and he pointed out that there may not be much of a market for an iPad party game.

But after 10 games and virtually no players, I guess this is just what I do now.

Anyway, he did say the game was fun and asked if the flamingo and the bomb were the only two items.

Apparently this is not enough.

So after some brainstorming, I went off and created a new item which I affectionately call “The Daisy”.

When you capture it, it shoots everyone else in the game.

Except they can dodge the shots.

Which got me thinking, “Why can’t you dodge the bomb?”

After a lot of agonizing thought and some introspection on the difficulty of creating a multiplayer game without any other players, I decided that in fact you should be able to dodge the bomb.

In my imagination, this creates a bit of stress, aka excitement, around grabbing the bomb because you may not be able to drop it on someone else, in which case it will blow up on you.

This means you have to think for a split second before just grabbing whatever shows up in the middle, in addition to having to think about what to do with what you’ve grabbed.

It also reinforces the primary mechanic of the game—dodging—which makes sense to me.

Now let’s see what you all think when you play it!

Oh, and the Dojji Ball has a new taste for fast-tappers. 🙂

NOTE: It takes some time for the various App Stores to approve updates, so you might not see these changes right away. They’re in version 1.0.21 and later.