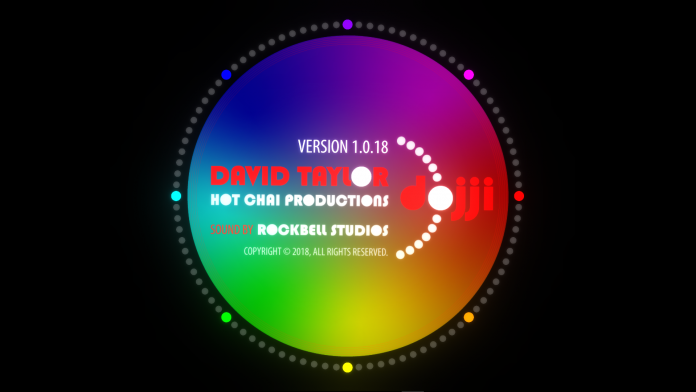 After 6 months full-time on ToonR, I decided to take a break and treat myself to making a game I’ve had in mind for a while.

I’m calling it “Dojji Ball” because (a) you dodge a ball and (b) I’m not very good at coming up with names.

Dojji Ball is my first entry into the arcade genre.

It’s also my first experiment with the idea of making your finger a physical participant in a touchscreen game.

Instead of you indirectly controlling some virtual character or vehicle or game piece, Dojji Ball lunges at your finger and you physically dodge it.

There’s no virtual character or controller between you and the game to slow you down.

I also wanted Dojji Ball to be a game where people could have fun together, more like playing over a table game, rather than being physically distant and staring down at their individual screens in isolation.

So in Dojji Ball, you all gather around and play head-to-head on the same screen.

I’ve only had 4 players at once so far, so tell me how it works with 8 if you manage that feat!

The first players were very unimpressed with the dodging mechanic alone.

They sometimes didn’t even play through one 60-second game, and I could see the pain on their faces when I would ask them to try the updates.

That all changed when I added the flamingo bonus.

The competition for the bonus, combined with the distraction of the Dojji Ball made things much more interesting.

Next up was the bomb, so you weren’t always sure if you should grab the item in the center.

And finally, the ability to bomb your opponents rounded out the game and made it feel complete with a full complement of dodge, grab, and attack mechanics.

I’m pretty happy with how it turned out.

If you want to try the beta, you can download it now while it’s still free at https://hotchaipro.com/dojji/.

P.S. Thank you to my early play-testers who helped shape the game: Alice, Elizabeth, Wenchang, Diego, Justin, Jeanne, Robert, Linda, Mom, Dad, and random Verizon guy. Even if some of you showed no interest and just quit or said “not my type of game”, your disinterest was enough to push me to make the game better (after I shook off the bout of depression that followed, of course. :)) Dojji Ball is a much better game thanks to all of you.