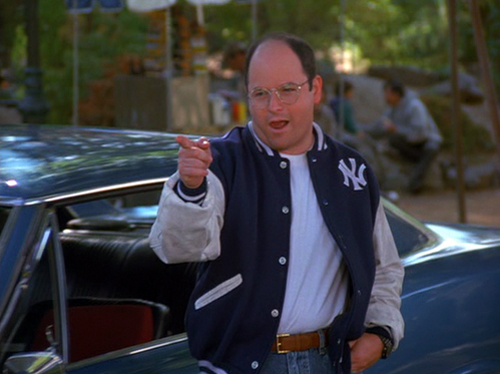 I’ve secretly always wanted to be a bad boy.

It comes from growing up geek.

The girls always went for the much-romanticized bad boys.

It wasn’t until years after they’d been mistreated, used and abused, that they finally seemed to figure out that maybe this wasn’t such a great idea.

The upshot is that nice guys are relegated to the aftermath of damaged psyches and usually an extra kid or two in need of a dad.

I’ve always wanted to be more appealing to the pristine, undamaged psyche.

And the criteria seems to be “bad boy”.

But like George Costanza, try as I might, I just had that smell of geek that women seemed to easily detect.

All that changed the other day.

I was weathering a storm of insults.

No home, no job, no car, no driver’s license.

You know, the usual.

And then it happened.

She called me a vagabond.

And she seriously meant it as an insult.

This feels like authentic bad boy material to me.

There’s just one little catch nagging in the back of my mind.

She’s the type that occasionally gets similar words mixed up. (Someone really should name that condition.)

I have the sneaking suspicion that she may have meant “vagrant”.

Which would be a lot less flattering in my book.

But she said “vagabond”, and I’m claiming it.