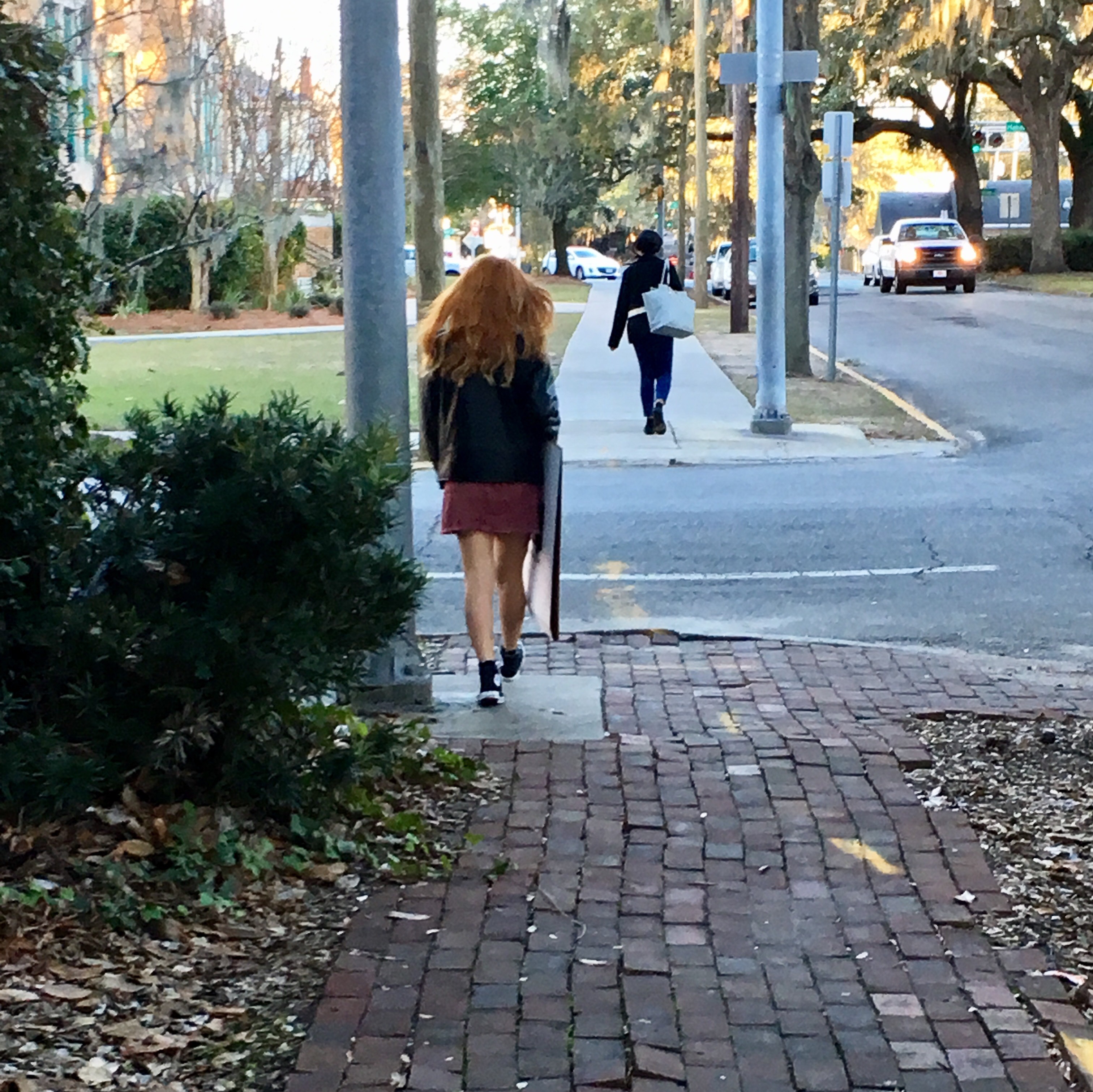 “There goes Grandpa!”, said my niece.

“Huh?”, I said rather eloquently.

I was feeling proud of myself as I mopped the floor with all comers at the foos ball table in the rec room.

Never mind that the competition was 8-12 years old.

We’re on Hilton Head Island celebrating Christmas in January as has become our family tradition.

He says it’s a bit scary when you realize you’re the oldest generation.

But let’s not dwell on that.

We wrapped up our ping pong, air hockey and foos ball games and went to find Grandpa.

We walked past the one-man band crooning some oldies in front of the pool and encountered an exuberant team of girls.

“Here’s your drink tickets! Hot dogs, chips and cookies are at the bar, and don’t forget to stay for the raffle!”

It’s the off-season at Hilton Head and there are just a few haggard souls here quietly living out their final days in peace and tranquility at one of the many time share resorts here on the island.

Every time-share here has exactly the same layout, so there’s never anything surprising that might otherwise rattle you.

It’s all very orderly and well-managed.

We walk the beautiful beach finding sand dollars and beached jellyfish, and ride the bikes my dad rented with the funny money he got for listening to yet another time-share pitch.

But back to the social.

Two tickets to ride the trolley in Savannah, Georgia!

Wait, isn’t that a two hour drive away?

I’ve got to hand it to my dad—he’s not one to walk away from free tickets to anything.

So my mom agreed to ride the trolley with him the next day and I said I’d go along for the ride, too.

“Just drop me off when you get there”, I said.

And that’s how I ended up walking the streets of Savannah this afternoon.

To be honest, I really didn’t expect much.

Probably some old houses (by American standards) and some war monuments.

And maybe an old cemetery if I was lucky.

I’ve gotta say that I really prefer a good coffee shop over decrepit old buildings and statues of dead people.

So I mapped out a few coffee shops to swing by.

(Hm. Maybe I should really stop treating every place like Seattle.)

I set my expectations dial to ultra-low and mentally prepared myself to relax and enjoy even the most boring city.

But I had hardly gone a block when I started to notice the people.

Artists sketching in the parks.

Producers and cinematographers excitedly discussing ideas for a scene:

“So we’ll have a shot of a man swinging a sledgehammer over and over, and then we’ll zoom in so you can just see his midsection and the physical effort of each swing.”

“I used a fogger once and the smoke just kind of layed on the ground. I think we should use a hazer instead.”

Just so much creativity and vibrant energy everywhere!

It turns out that this is the home of SCAD.

Savannah College of Art and Design.

Ahah! That explains it!

I just love the way the art students dress.

Each one trying to be weirder than the next.

The place was suspiciously deserted, and it wasn’t much to look at from the outside, but I headed on in.

The espresso had an interesting flavor—almost like someone added a secret spice—that threw me for the first sip.

But I loved it! You should try it!

I was also able to confirm that the formal procedure for a “fecal event” was prominently posted inside the restroom door.

In case you’ve never had one of those before, I suppose.

I left Savannah Coffee Roasters and walked south on Bull Street, making sure to get a shot of Bull & Taylor just because.

Bull Street is great–there are parks in every square, culminating in Forsyth Park.

It was inspiring walking by artists at work sketching in the parks.

I wanted to take pictures, but I didn’t have the nerve to ask.

My parents came back from their trolley tour full of facts and figures about Savannah, of which I was completely unaware at the time.

Like the fact that when General James Oglethorpe first settled Savannah in 1733, he enacted laws banning slavery and requiring peace with the native Americans.

He also banned attorneys from the entire state of Georgia, declaring the state to be “free from that pest and scourge of mankind called lawyers”.

So, as I gallivanted merrily down Bull Street, I was completely oblivious to the fact that I was passing through what was formerly one of the largest slave-trading operations in the state.

Apparently, slaves were once auctioned off in these very squares.

I was also oblivious to the fact that the state of Georgia was so opposed to Abraham Lincoln (who later abolished slavery in America) that he was not even on their presidential election ballot.

However, I did note that one of the most striking historic buildings that I passed was occupied by attorneys.

Maybe the trolley tour would have actually been beneficial to my exploration.

Ok, this place was fascinating.

A building with character.

The kind of building that has so much character that you need to ask a local where you might find the entrance.

It’s chock full of nooks and crannies and alcoves, a deck, and fascinating aspiring artists.

And… one very special surprise!

I headed upstairs with my horchata latte (highly reviewed on Yelp), and found the one remaining seat in the corner.

You know, the one for the loner who has no friends and only needs one chair.

As I was choking on my latte, I felt a stabbing pain in my leg.

At first I thought maybe it was a stinging insect? Deep vein thrombosis? Was I dying?

But no, it was just a broken chair spring stabbing into my upper thigh.

Thankfully, dusk was nearing, so the glow from my shockingly white leg wouldn’t be completely blinding through the back of my pants.

One bit of advice for this place:

Do not, I repeat, do NOT, order the horchata latte.

The Yelp reviewers are obviously either delusional, taste-challenged, or playing a cruel joke.

Foxy Loxy’s Horchata Latte, however, is the opposite of delicious.

That said, I’d happily order this disgusting beverage and throw it away every day just to hang out here.

Thankfully, there are some other choices on the menu, and there’s no way they could all be this bad.

On the way back north to meet the parents at Leopold’s Ice Cream shop, I passed students heading to their classes, carrying their portfolios.

Maybe I should have gone to school for art instead of engineering.

I rushed past a lovely old cemetery replete with Spanish hanging moss.

Oh, how I wish I had more time.

But Leopold’s ice cream is good.

I recommend the Rum Bisque.

The good General Oglethorpe outlawed rum back in 1733, but by the time the Leopold bros immigrated from Greece and whipped up the secret recipe for this flavor in 1919, the lawyers had figured out how to undo all his efforts and put themselves and the rum back on the menu.

I also had the original Lemon Custard—another favorite since 1919.

I came expecting so little, fell in love and never wanted to leave you.

May we meet again to dream away some warm summer day under the gently swaying Spanish moss.

(Enjoy the beautiful ballad “Moon River” written and performed by Johnny Mercer, son of Savannah, on this week’s podcast!)