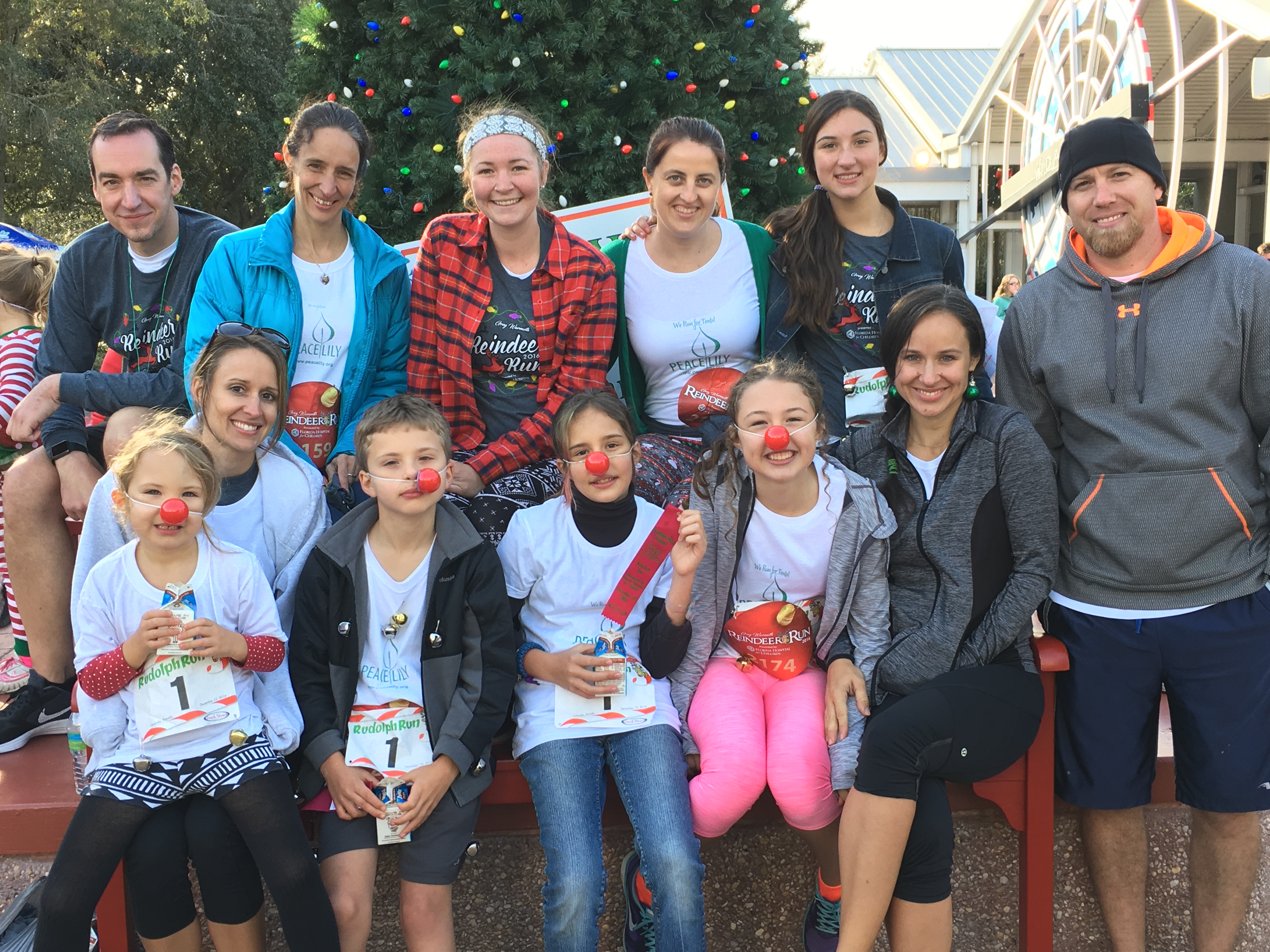 Eve messaged me, “We’re doing a 5K fundraiser for Peace Lily. Sign up!”

(The next day) “Have you signed up yet? Have you? Have you?”

We got off to a late start, pinning on our numbers as we started running with the slackers.

It was the Reindeer Run at Sea World in Orlando.

I have it on good authority that Sea World soon won’t have animals anymore thanks to the BlackFish documentary.

They’ll be replacing the whales with theme park rides.

Every time I hear something about caged animals, I feel a pang of guilt from my childhood.

I grew up deep in the hundred-acre woods, exploring, building forts, and later, starting fires.

Right up until I started reading my dad’s book on BASIC programming for Radio Shack’s TRS-80, which would forever change my life.

During one of my deep woods explorations, I came across a large mud puddle.

But wait, what was that?

A flash of orange.

I fished about a dozen bright orange salamanders out of the puddle and excitedly brought them home to spoil them with their own little kingdom.

I created a salamander utopia in a large box on the porch, replete with sandy beaches, pools of fresh water, and lots of tasty green delights.

I actually wasn’t sure what salamanders ate, but I figured I would start with grass and leaves, and if they didn’t like those, I’d eventually figure it out when I got to the library and read up on the diet of a salamander.

If only I had had the vast resources of the Internet at my disposal!

My little orange salamanders were just so cute with their tiny little toes and beady black eyes!

Sadly, their perfect world turned out to be more of a house of horrors as every last salamander turned to a dry husk within two days.

I guess the silver lining is that, since that experience, I have not wanted to imprison another animal, even with the best of intentions.

So on we ran for the Yazidi.

Past the pink flamingos (ooh!).

Through the fake falling snow (aah!).

I didn’t even know who the Yazidi were.

But at the Peace Lily Open House, Ben told us about his recent visit to one of their refugee camps in Iraq.

Something about their plight really touched him.

The Yazidi religion alienates them from both Christians and Muslims, and they are actively persecuted as “devil-worshipers” by ISIS.

They are now refugees in their own country and desperately in need of basic necessities such as shelter.

Ben and Eve are not the type to sit around when there’s something that needs to be done.

No, they’re the type that you just want to get behind and support and watch them go.

So of course within the next couple of months they birthed Peace Lily Foundation, named after their daughter.

And this is why I’m sweating at Sea World in this white Peace Lily t-shirt.

Waiting for Slowhanna to cross the finish line so we can go eat our cookies and drink our chocolate milk.

And later, it’s why I’m propping one eye open eating even more cookies and chocolates while Eve, energized by the long day of preparation and guest entertainment, tackles the mountain of dishes.

Yes, entertaining a burgeoning houseful of guests actually energizes her.

So weird, that one.

Fast forward a couple of weeks to when I’m chatting with a friend who is politely trying to get off the line.

“I have to go. I have to find someplace to give money away”, she said, “It was a very good year!”

I just love it when my friends make loads of money.

They always do good things with it.

Like support their families and give to good causes.

It’s one of the reasons why I was proud to help carry on Bill Gate’s dream rather than Steve Jobs’.

And why I begrudgingly allowed Bill to leave Microsoft.

It was for a good cause.

Anyway, back to my friend giving away money.

“I can certainly help you with that!”, I said.

“Poor wandering bachelors do not make the list”, she said.

So I told her she could support my Peace Lily 5K after the fact.

And since I had already completed it, there would be no risk of failure.

And she fell for it!

So the joke is that I brought in more money for the run than everyone else put together, after refusing to fundraise.

A need effortlessly matched up with a surplus.

Isn’t it interesting how these things work out?