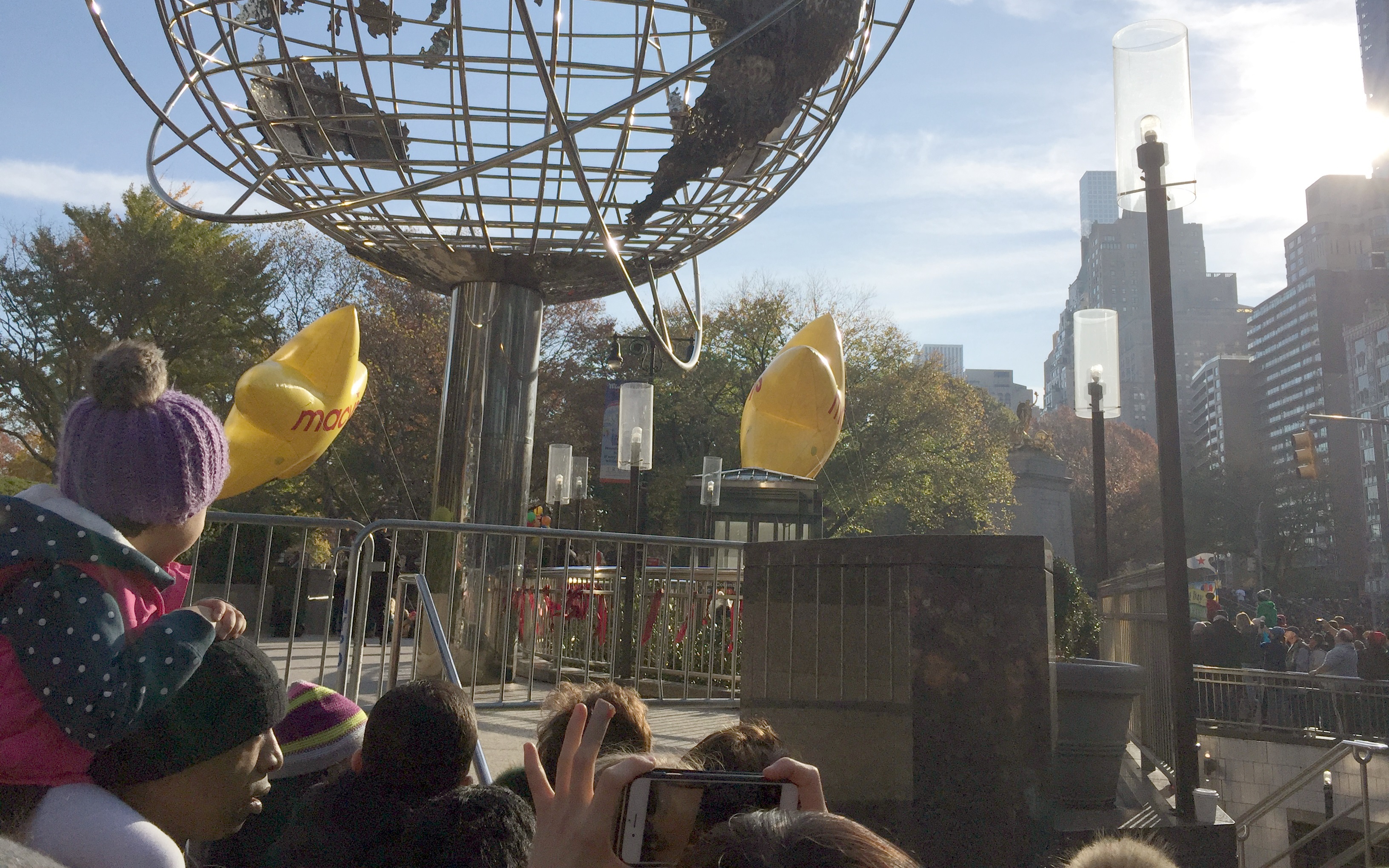 After a couple of false starts (“Forgot my sunglasses”, etc.), we were off to find a spot to watch the parade.

We walked a few blocks to Columbus Circle and set up camp right on the curb.

Front row on the parade route.

This was too easy!

Then it was time for Kailey’s caffeine fix.

I opened up Yelp to find a good place, but Kailey took off and left me to hold the spot.

“This is New York!”, she said, “I’ll just walk and find something.”

Then the good news from one of New York’s finest in blue.

“Did you know the parade doesn’t come this way?”

Oh yes. A brilliant civil engineer with a plan built traffic lights that block the floats from coming around the circle.

In the meantime, thousands of people continued to stream into the streets.

It was getting seriously packed.

Where the heck is Kailey?

Ok, I have got to move or we won’t see the parade, which was just, oh, the entire reason for this trip!

So I call Kailey, tell her where I’m heading, and pray she can find me in the throng.

I still can’t quite make it to the parade route, but I find out that there’s a way through on 62nd a few blocks uptown.

I don’t dare go yet, though, since Kailey will never find me.

Oh, and she has no coffee.

We rush down to 62nd only to find out that we need tickets to get through.

To stand on the street and watch the parade?

It’s New York. I should have known.

But I didn’t. And they’re all sold out.

So, back to the corner just one block over from the parade route where we’ve now lost the front row position Kailey had been holding.

It looks like this is as close as we’re going to get.

Oh, but the drama is far from over.

It turns out that caffeine is not optional for Kailey.

It’s pretty much her only fuel.

Parade or no, Kailey must have her coffee.

So against my better judgement, I leave her behind and head for a coffee shop listed on Yelp.

30 minutes later, I come to the conclusion that there’s no way to get there from here without that dang ticket.

Now things are really getting down to the wire.

I have about 30 minutes until the parade starts.

And still no coffee.

Do I return empty-handed and risk the wrath of an uncaffeinated Kailey, or do I continue the search and miss the parade?

How much damage can she do without her caffeine, anyway? Eventually she’ll just hit the wall and go catatonic, right?

The crowd was getting ridiculous, and I wasn’t even close to Kailey yet.

A bakery with an espresso machine?

The line is long, but moving, so I take a chance.

I’ve been in enough cafés to be able to make a pretty good judgement about their espresso at a glance.

The prognosis was not good. Not good at all.

But there’s caffeine in them thar beans, so they’ll have to do.

The espresso arrives and I start the trek back to Kailey.

Only to find there is absolutely no way I’m going to push through this crowd to the front.

People are packed in like fat turkeys waiting for the butcher, climbing up on dump trucks, walls, fences… the streets are bursting at the seams and people are squeezing out everywhere.

I can’t believe this is happening.

The dream that started as a text message in Iowa, a road trip down to North Carolina, up to Syracuse, that extraordinarily painful night in Hotel Prius, hours on the Metro, Grand Central, a cab to an AirBnb in Hell’s Kitchen just two blocks from the parade route, a 5:30am alarm… it was all about to be for naught.

We’re not on the parade route.

We can’t see anything but bodies in lumpy coats.

And we’re not even together.

I cannot let this happen.

I take a deep breath, say a prayer, and push forward in the general direction of Kailey holding the coffee cup out in front of me.

“Coffee delivery!”, I say over and over, “My girlfriend really needs her coffee right over there!”

The coffee cup parts the sea of people in front of me like magic and I can see Kailey’s arm waving above the crowd just a little further ahead!

Somehow, I make it all the way to Kailey just in time to get a glimpse of the Macy’s stars as they go by.

We can’t hear or see anything at ground level, but we can see the big floats as they peek out from behind Trump Hotel, just before they’re obstructed by the globe sculpture and then turn the corner and disappear for good.

For the next 3 hours, we stomp our feet and profusely thank the genius who invented hand and foot warmers, occasionally noting a float passing by in silence, having absolutely no idea what’s going on in the parade.

The crowd is restless. People jockey for position in the hopes of catching a glimpse of something. It’s a fight just to stay put.

As for the coffee?

She won’t touch it.

We come to the conclusion that it was the same cup of coffee that she had found earlier and threw out as an act of mercy.

To avoid holding the coffee for 3 hours, I get down on the ground in the crowd and slide the cup outside a barrier where hopefully it won’t get kicked over.

I’ve since been asked a few times whether I recommend a trip to see the Macy’s Thanksgiving Day Parade in person.

That said, it was a total blast!

Wouldn’t trade that adventure for anything.